What are you here for, friend?

Since mid 2021, when head of Instagram, Adam Moserri bluntly announced “We are no longer a photo-sharing app”… photographers have been increasingly left in the dust from with Instagram’s algorithm changes as they continue to prioritize video over images.

Photographers across the board have seen the performance of their photo-based posts decline, and the influencer marketing platform, HypeAudior, analyzed 77.6 million Instagram posts to see how different types of content perform on Instagram. Not surprisingly, reels led the pack with the number of received likes (35.4%) and estimated reach (33.8%).

It seems like as photographers, we’ve been given an ultimatum: create video content (i.e. reels) or watch our engagement and reach tank.

Instagram has been a key marketing platform for our photography business Adventure Instead since 2016 and considering about a third of our inquiries come from Instagram (up 10% from 2021), it’s not a tool we’re willing to give up.

And while there are lots of ways to create video content and reels as a photographer: (watch our free workshop on “Instagram Video Content Strategies for Photographers“), as photographers, we were curious how to best leverage our primary content medium: still images.

So how can we as photographers, get our still images seen on Instagram? How can we succeed?

I went to my Weddings & Wanderlust Facebook group community of of 25,000 photographers to crowdsource data from real image-based Instagram posts submitted by members. I asked photographers to share their best-performing image-based feed posts (by reach), complete with screenshots of the post’s performance. Our team then took that information, along with other relevant profile data and broader research conducted on this subject, and found three main similarities between what types of feed posts are performing well on Instagram in 2022.

After analyzing roughly 150 real Instagram posts, we’ve learned some key insights into how to succeed on Instagram as a photographer.

HOW WELL ARE THESE “BEST” IMAGE-BASED FEED POSTS PERFORMING?

After compiling the data, we were excited to learn just how well these submitted posts did in comparison to both their profile’s averages & industry standards. Before we dive into the key components of a winning feed post, here are some fascinating analytics we learned.

Additionally, according to Social Status, an industry leading social media analytics platform, the average reach rate (the percentage of followers who see your post) on Instagram in August 2022 was 12.76%. Compared to our findings, our average reach rate was a whopping 112%, far beating the average, and implying that these posts were being seen by an audience greater than just their following (Fig 2). While reels continue to dominate reach data, it’s encouraging to see that image-based feed posts are still getting attention outside of an account’s followers.

After thorough analysis, we found three elements that make an Instagram image-based feed post stand out from the rest:

76% of participants’ best performing posts were a type of carousel (Fig 3). Most were a selection of images, some were a combination of videos & photos, and others were “collage” carousels with multiple images on a carousel slide, or images spanning multiple carousel slides, like this post by @pixbyalina.

When looking at these high-performing single image posts, we discovered a common thread: a longer caption, like this post by @aimeeflynnphoto.

This leads us to our second observation: caption length.

In 2019, social media platforms Later & Fohr found that the average caption length has more than doubled since 2016, with projections that the average Instagram caption would be 405 characters in 2020. While we don’t have updated data for 2022, comparing our data to this information further shows that longer captions are here to stay (Fig 5).

But it’s not enough to simply write long captions. These captions are a way for you to tell a story, educate your audience, and keep them coming back for more. Two excellent examples of this are from @laurencasino & @manonpsomas.

Both posts tell a story in their own unique way. The first paints a picture of an elopement day, allowing the reader to imagine themselves in the narrative. The second focuses on education and a common misconception about what it means to elope, and encourages the reader to learn more about her services.

No matter what your caption focuses on, use the 2,200 character limit to take readers on a journey and invite them to imagine themselves in your work. If you’re interested in writing compelling Instagram captions, we have a free workshop on this topic, titled “How to Write Instagram Captions that get Comments, Saves, & Shares.”

After examining different types of feed posts and their captions, we narrowed down our samples to the top 10% of both reach & engagement.

From that list, we discovered something that wasn’t easily quantifiable: they all had first and second images in the carousel with that that *wow* factor that made us want to stop scrolling & sit with the post.

Why does the first and second images in a carousel matter?

Well, as most photographers who use Instagram know, when carousel posts show up on followers (and non-followers) main feed, the first time a viewer will see a carousel post, it will have the first image showing. The first image in the carousel is the main part of the content that will get a viewer to stop scrolling and engage with the post.

What many don’t know though, is that if a viewer doesn’t engage with the post when they see the first image in a carousel, Instagram will “resurface the post later with the second slide displaying. So even if your viewers scroll past the first time, you get a second chance to engage them with slide two.” – Source: AgoraPulse

In conclusion—while it’s important that every image in a carousel feed post is stand-out, by making sure that the first and second “slide” are the most eye-catching, it will dramatically increase your reach and engagement.

So what type of images can be defined as “scroll stopping”?

While we couldn’t find any simplistic similarities (such as color vs. black & white), we did find some common themes what types of images were most likely to catch viewers eyes and inspire engagement (and therefore reach more people).

Most photographers know that contrast is one of the key elements of composition that draws a viewers eye into an image—and this is true for images shared on social media as well. We noticed the images in the top 10% of samples for reach and engagement had images with a strong use of contrast in either light (dark vs. light), color (contrasting hues), or depth of field (crisp subjects vs. blurred out background).

Contrast is a huge factor that helps images be stand-out, especially at the “postage stamp” size that images are displayed on a grid, the explore feed, etc.

Pro tip: When deciding between what image to post, look at your images on a phone, at the same size they will appear on a grid. You’ll notice images look very different on a 6″ screen than they do on a 26″ screen.

With the volume of content that most Instagram users consume, the more unique of content you can share that doesn’t look like anyone else’s will out-perform images that are similar to images users have seen before. This was especially obvious in the top 10% of posts by reach and engagement—almost all of them had a unique element in them that you just don’t see every day, or content that provokes a strong emotional reaction (like a laugh, cry, or deep feeling of love/romance). Unique photo treatments and techniques (such as double-exposures) also performed well.

Out-of-the-ordinary content will catch a vier’s attention, stopping the “zombie scroll” and giving a viewer the chance to consume and engage with your post.

Pro tip: Don’t be afraid to post images that are a bit “weird”, different, or something that you don’t see everyday and that won’t “blend” into a typical user’s feed.

Images that viewer can “imagine themselves” in

When we looked specially at the images that were “saved” the most by viewers, which has become a very important part of how the Instagram algorithm determines the reach of a post, we noticed a lot of images where the subjects face wasn’t shown—meaning it was either photographed from behind the subject, the subject wasn’t in-focus, or the subject was a very small part of the frame.

These type of inspirational images allow a viewer to “put themselves” into that scene or moment, and truly imagine what it would be like to be in that image themselves. Since many use instagram to find inspiration and ideas for themselves, these type of images are more likely to be saved and shared than an image with a prominent stranger’s face as the primary subject.

Pro tip: For images that really draw in a viewer and that they can immediately “imagine themselves” in, try looking for photos that don’t show faces, that are shot from behind the subject, silhouettes, or “tiny subject big view” images.

An additional finding we had was one of these top posts in both reach & engagement was a multimedia collage carousel, meaning the post, submitted by @photosbygayle, included both collage elements and a gif/video. This was one of only two posts of its kind submitted, and we believe there’s huge potential for these types of posts to rise in both effectiveness & popularity—especially as Instagram continues to prioritize video.

It’s also important to monitor your own analytics, as those numbers are unique to your account & audience, and they may differ slightly from what we’ve learned on a broader scale.

Have you noticed any similarities between your most successful Instagram feed posts? Let us know what’s working for you in the comments! 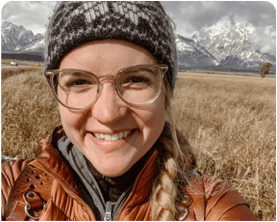 Your Elopement Photographers & Planning Consultants. We are Maddie Mae, Amber, and Tori. We're your photographers, your elopement consultants, your cheerleaders, and your go-to adventure buddy on the day you say your vows.

Get in the group

Want weekly free business tips straight to your inbox? Sign up to get notified of new free resources so you don’t miss out! No spam, I promise